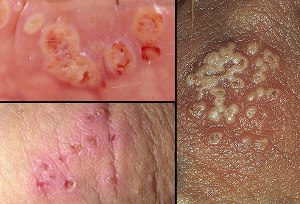 According to US Department of Veterans Affairs, the 3  kinds of herpes simplex virus are:-

Herpes does not always produce symptoms. If it does, the symptoms vary with each person. Or it can be so mild that they are not aware that they are infected.

But for some people, the infection may manifest as an initial outbreak of itchy and painful sores within two to 14 days after being exposed to the virus.

What Does An Initial Vaginal Herpes Outbreak Look Like

These sores may be accompanied by flu-like symptoms such as swollen glands, fever, chills, muscles aches, fatigue and nausea. They may also have abnormal vaginal discharge and pain during urination.

An initial outbreak may last from two to three weeks. The blisters will heal over, forming scabs that will fall off. At this point the virus has gone into remission, hidden well inside your nerves. At this dormant state, the virus can still be transmitted through unprotected sex.

Newly infected victims can expect to have three to five outbreaks within the first year of diagnosis. Over time, subsequent flare-ups are less severe with longer intervals between each outbreak.

However, vaginal genital herpes can be severe in people with impaired immune systems such as people with HIV.

There is no cure for vaginal herpes. It is a life-long condition. But antiviral medicine can:-

According to research, diet and stress can trigger an outbreak. So managing your stress level and eating a healthy diet can help to prevent those sores from popping up.

During outbreaks, the virus can be very contagious. The following steps can speed healing, prevent the infection from spreading to other sites of the body or to other people:-

If you’re pregnant and have herpes, your doctor may suggest that you have your baby by C-section.

Why? During vaginal birth, the herpes virus could spread to your baby, especially if your first outbreak happens around the delivery time. The virus could give your baby rashes, eye problems, or more serious issues.

A C-section makes that less likely. Your doctor may also have you take anti-viral medicine as your due date gets closer.

It is not easy living with vaginal herpes but with the above preventive measures, you can still have a healthy sex life.