Normal vaginal bleeding is periodic blood that flows as monthly menses from a woman’s uterus. This process is referred to as menstruation. Menstruation occurs as a result of monthly hormonal changes in our body.

Most of these hormones, particularly vaginal estrogen are produced by the ovaries and they are responsible for the development of our female characteristics such as breasts, body shape and body hair. 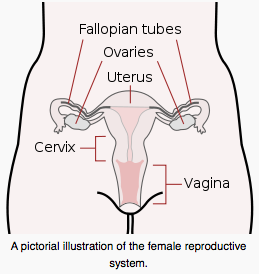 The ovaries are located in the pelvis, one on each side of the uterus. They are the reproductive glands of a woman. Each ovary is about the size and shape of an almond. The ovaries produced eggs (ova) as well as female hormones. During each menstrual cycle, an egg is released from the ovary. The egg travels through the fallopian tube to the uterus.

The uterus prepares for the egg to be fertilized by thickening its inner lining. If pregnancy does not occur, this protective lining is shed which results in what we called as period. Period or menses is part blood, part tissue from the uterus. Blood flows out through the vagina as normal bleeding.

For a healthy woman normal vaginal bleeding occurs at approximately four weeks or ranges from 21 – 35 days. The flow can be heavy or light and last from 2 to 7 days.

Some women experience heavy periods. The medical term for prolonged vaginal bleeding that occurs at the regular time of menstrual cycle is menorrhagia. If you know your body well and menorrhagia occurs regularly, then it is still considered as normal bleeding.

I started having heavy period that last for 8 to 9 days after my pregnancy. It will be heaviest on the 2nd and 3rd day with blood clots. Menorrhagia might not be considered as abnormal bleeding from the vagina, although it can be very uncomfortable and troublesome when traveling as I need to change pads frequently.

Other than monthly period, the following occurrences are considered as normal bleeding too.

For those of you ladies who have daughters, do you notice that infant baby girls have a spot of blood on their intimate area during the first few days after their birth. It is about half a teaspoon of dark blood which can be wiped off with a square of cotton.

I have had this experience when my daughter was born. My mum reassured me that it was normal. A check with the pediatrician confirmed that it was nothing out of the ordinary.

This is due to the withdrawal of hormones the baby is exposed to in the womb. This will be her first and last menstruation for another decade or so. But any blood beyond the first week of birth should warrant seeing the doctor.

It is normal to have heavy bleeding during the first few weeks after delivery (post partum) or after an abortion. This is because the uterus has not contracted to its pre-pregnancy size yet.

As a woman we should know our body and our monthly cycle well. We should be aware of the due date of our monthly period, how much vaginal bleeding we have and how we feel.

Basically we should not ignore any bleeding that is unusual from what we normally have. Any abnormality in your bleeding pattern should be checked out without DELAY.